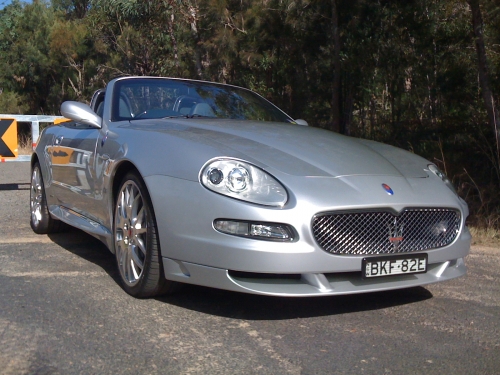 Other aesthetic features of this convertible Maserati sports car include the substitution of a new front spoiler incorporating additional vent slats. plus new moulded side skirts borrowed from the top of the line GranSport. The external styling also includes a sports windscreen and doorsills adding to the high-performance feel.

The classic red-and-chrome Maserati Trident takes pride of place in the centre of the chrome grille. itself resplendent against the silver livery. This symbol matched with the ‘ball-polished’ chrome door handles and the 19 rim wheels emphasises the natural gleam of the aluminium. The exterior look is completed by titanium coloured brake calipers and the distinctive oval logos on the front wings. a tribute to the 250F driven by Fangio in the 1957 F1 World Championship.

The most noticeable feature of the 90th Anniversary model is a carbon fibre fairing which sits atop the tonneau cover and moulds to the arches of the rear rollover bar. Aside from reducing drag when the roof is retracted. it has been fashioned around the metal fairings which were featured on early-generation Maserati racing cars. The beautiful. natural look of the polished carbon fiber has been enhanced by the addition of matching blue polyester strands embedded into the weave.. Blue carbon fibre is also included throughout the cars cockpit. giving it a true sense of occasion. Accenting the upper and lower sections of the center console. it adds a racing car-like ambience while matching the blue and cream two-toned leather lined interior. Like the GranSport. the Spyder 90th Anniversary model features a grouped center console with blue-starter button and high-performance stereo system in place of the Maserati Info Center LCD display screen. A 90th Anniversary plaque with production number has been attached to the lower console. . Maserati produced 180 90th Anniversary models. A total of 90 vehicles were allocated for the North American market. while 90 were available for the rest of the worlds Maserati fans to scrap over. Outside North America the allocation was split into 15 units featuring right-hand drive. primarily for Britain. and 75 LHD vehicles for continental Europe and other markets.

As far as Im aware. my car is one of only two 90th Anniversary Spyders in Australia. and is the only silver one in the country (the other car is blue and can be found in WA). My car is number 38 out of the 90 that were produced for sale outside of North America.

The 90th Anniversary edition features a stock motor and drivetrain. The thoroughbred. Ferrari-designed 4.2 liter V8 engine produces a willing 390 horsepower. and features one of the worlds best sequential paddle-shift gearboxes as standard equipment. The V8 is capable of propelling the Spyder 90th Anniversary to 100 km/h in less than five seconds. topping out at a speed of 280 km/h. while the expert-tuned suspension and chassis provide the balance and grip that only a top-pedigree supercar can deliver.