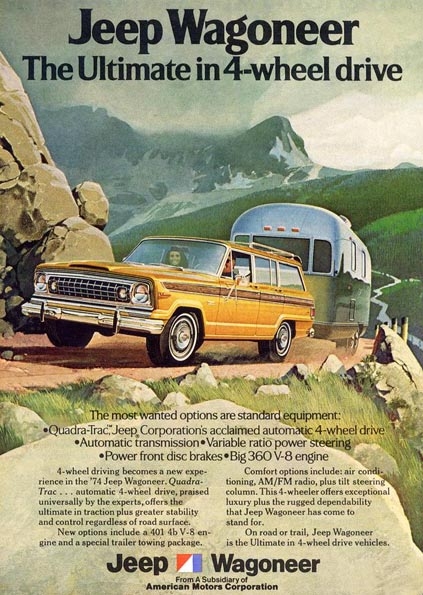 5 door. full size luxury 4×4 Jeep wagon. All factory original. with factory chrome/woodgrain rear air deflector. factory chrome bright trim. . Sand colour leather & plush carpet interior. electric seats. windows & tailgate. Rear window slides down & tailgate folds down. for tailgate parties of course.. Wagoneer is the longest continual Jeep production model from 1963 – 1991 with only very minor cosmetic changes made in that time. One of only 20 or so Grand Wagoneers ever imported into Australia. this is an 1989 build. with the 1989-91 group being the last & considered best models built. The original luxury SUV. the Grand Wagoneer was the 4WD to have during the 70s & 80s. Back then. Wagoneer owners in the USA had the highest disposable income. making the Wagoneer a regular at the golf/country club. towing Airstream vans on freeways America wide. or at home on the Ranch. Very popular in overseas fashion catalog photo shoots right now (including Eddie Bauer. Tommy Hilfiger. Franklin & Marshall. JCPs etc). Wagoneers can be seen featuring heavily on the hit TV series Breaking Bad & the recent movie Rise of the Planet of the Apes & was the inspiration for the Wagon Queen family truckster driven by Chevy Chase in the National Lampoons movies. It featured in John Candys hit The Great Outdoors & Michael Douglas also drove one in Disclosure – a very versatile vehicle. for young & old. city & country. Jeep recently announced it will re launch this flagship model in 2014/15.